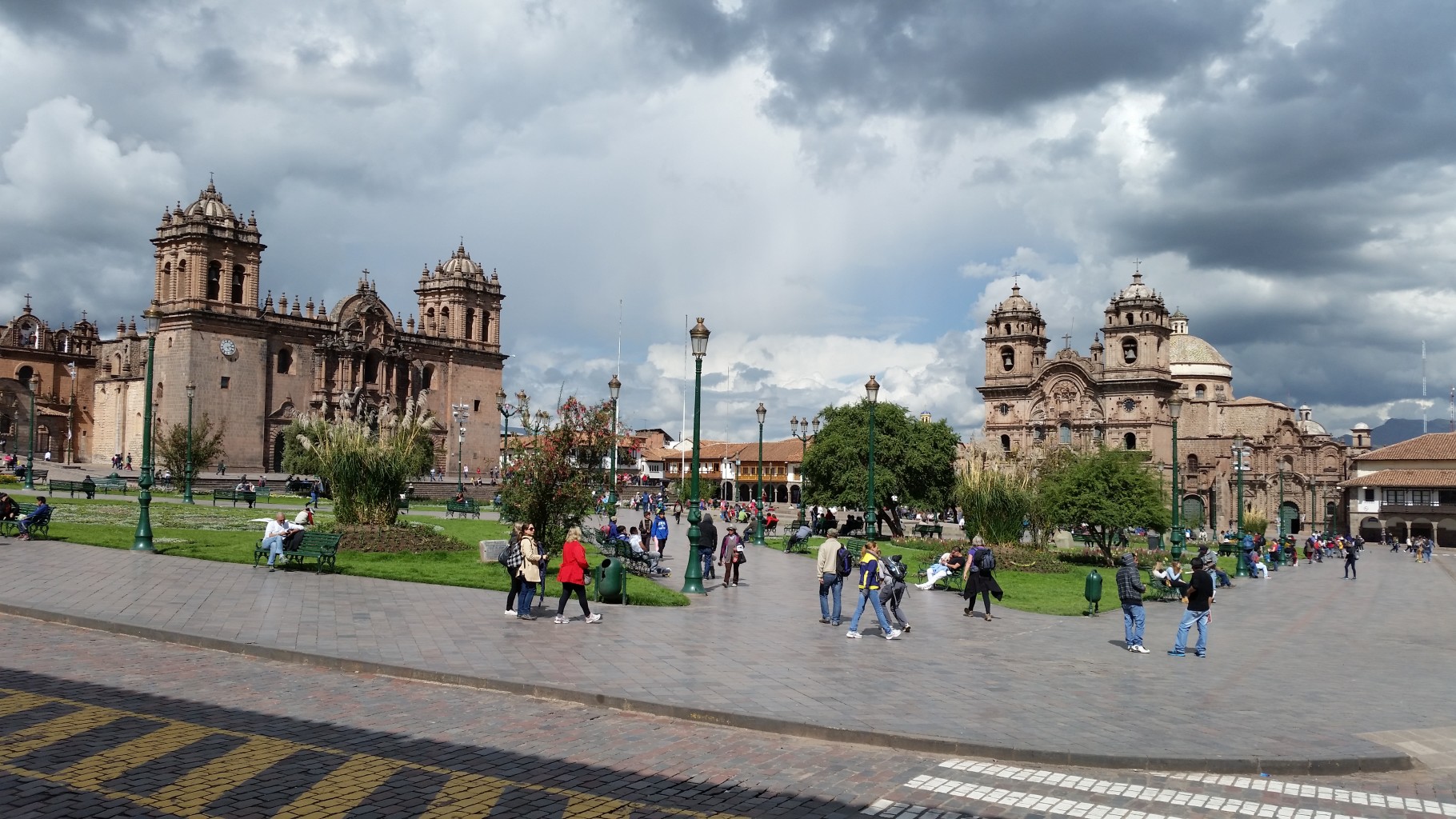 before making your trip to the imperial city “cusco“, it is highly recommended to look for information and important data. this time we present 8 tourist data on cusco that will help you plan your next adventures to Inca lands. Cusco’s historic masterpiece, the Plaza de Armas, also called Huacaypata(plaza del llanto).is a large, well-kept plaza that presents a monument to the expansionist Inca ruler Pachacutec, who has been described as a South American Alexander the Great.

There are restaurants, bars and cafeterias very well distributed on the perimeter, with elevated points of view to observe the people, overlooking the cathedral and the company of Jesus.

The dominant structures overlooking the plaza are:

both built by the Spanish conquerors. For information on the history, architecture and works of art contained in each church, a tour is essential.

Art, Painting and Ceramics in Cusco

An important point to take within the tourist data on Cusco, is the art, painting and ceramics Cusco.

Many of the important artistic expressions of Cusco are found in museums and churches, to which every visitor has access with due responsibility and respective entrance ticket.

There are museums dedicated to chocolate and textiles in Cusco, and one highlights the importance of the coca leaf in Peruvian society.

Before heading to the archaeological sites of Machu Picchu and the Sacred Valley, consider visiting the Inca Museum. Located in the colonial home of a Spanish admiral, 24 exhibit halls are filled with information dating from pre-Inca societies to the Spanish conquest. The museum’s mummified bodies are the highlight.

“In some museums photography is prohibited; for more information you should consult your private guide or ask for information before entering art centers and important churches.

European and Cusco artists painted the works of art inside the Cathedral of Cusco and, this diversity is reflected in the different styles.

The statues of Jesus, Mary and Joseph, introduced to Peru by Spanish settlers, are present, but there is also a notable presence of gold and silver, Inca influences that represent the gods of the sun and moon.

Some clothing styles represent elements of Mother Nature. A considerable painting of the Last Supper with a guinea pig on a serving plate is included and the “traitor Judas” resembles mischievously “Francisco Pizarro“, the Spanish general whose army caused the fall of the Inca empire in 1533.

A very visited point and that should be considered within the tourist data on Cusco and is always promoted in all city tour services, is the visit to the temple of the sun or also called “Qoricancha“.

The most important temple of the Incas, Qorikancha, or Temple of the Sun, was the beating heart from which the arterial roads unfolded to the most remote corners of the empire.

All were looted by the Spanish conquerors, who built a Christian church on the remains of the Inca temple.

Later earthquakes damaged the church, but its foundations, built with stone blocks intertwined by the Incas, still stand, a testament to the Inca’s sophisticated masonry skills.

Viewpoint of the imperial city, the best view of Cusco.

The Incas built Cusco in the shape of a puma, with the 15th century Sacsayhuaman fortress representing the head, the Plaza de Armas the heart, Qorikancha as the hips, and the convergence of the Saphi and Tullumayo rivers is said to be the tail.

The point with the best overview of the city is Cristo Blanco.

the giant statue of Christ on the hill of Pukamuqu, near Sacsayhuaman, whose dry stone walls six meters high were adjusted so precisely that not even a single piece of paper could be squeezed between stones.

The walk to the statue, an “eight-meter-high version of Christ the Redeemer of Rio,” is a 30-minute uphill walk from the Plaza de Armas and it is particularly rewarding to watch the sunset when the Cusco lights flicker.

buy handicrafts and textiles in Cusco.

Get to know the San Pedro market and the San Blas neighborhood, important points that are considered in the tourist data about Cusco for their local value and customary expression.

In the San Pedro market located three blocks west of the Plaza de Armas, you can buy everything from cheap flutes to phallic wood carvings and Andean chalets.

There are shops or boutiques where jumpers and carpets of alpaca wool are sold at high prices. Go to Cusco’s nonprofit Center for Traditional Textiles to obtain ancestral Peruvian textiles.

visit to the sacred valley of the Incas. Some tourist data about Cusco are located outside the city, such as: the Sacred Valley and Machu Picchu.

The Sacred Valley of Cusco extends from west to east along the Vilcanota River and Urubamba River, from Machu Picchu to Pisac, 1000 meters lower than Cusco.

most of the villages (provinces, districts and communities) of the sacred valley speak Quechua, the language of the Incas, and for many their way of life has not changed much.

In the sacred valley they cultivate corn, vegetables, little cattle and weave brightly colored textiles, as their ancestors did.

The textile center of Chinchero is a popular first stop outside of Cusco.

The agricultural terraces that were carved into the hillsides above Ollantaytambo and Pisac are striking backdrops, and Pisac has a lively market for products and crafts every Sunday.

Moray, west of the town of Maras, was the center of Inca agricultural experiments. Its circular terraces have different microclimates that were used to test crops in different conditions. The salt pools of Salinas, near Moray, make a photogenic detour.

tourist data about cusco, visit to machu picchu from cusco

Cusco is the gateway to Machu Picchu, the Inca citadel declared a World Heritage Site.

Machu Picchu is only 75 kilometers from Cusco, a train ride from the Sacred Valley (ollantaytambo station) is the easiest way to get there.

The train ride ends in Aguas Calientes and from there the buses transport visitors to the Machu Picchu mountain.

Entrance tickets must be purchased in advance through the official website of the government or travel agencies.

With admission now separated into morning and afternoon time intervals, up to 5600 tickets are issued per day.

Visitors must also be accompanied by an official guide, who can hire outside the entrance gates.

Independent access to the Inca Trail is almost impossible these days due to the popularity of the hiking route.

Permits run out shortly after the launch, so your only option to make the tour is through a local travel agency or booking a tour through a tour operator such as inkatimetours.

The “altitude sickness” soroche to keep in mind during your trip to Cusco.

When you arrive in Cusco, there are many chances that you will feel breathless, headache and perhaps even nausea.

In Cusco located at an altitude of 3369 meters, it is normal that the visitor feels such discomfort, because the visitor is not accustomed to lower levels of oxygen.

It does not take long to acclimatize to this change. Your best option is to slow down and drink plenty of fluids, but avoid alcohol.
Don’t try to do too much in your first few days. If you can stand its earthy taste, sandy texture and perpetually dry mouth, chewing coca leaves will help. And every hotel in the city has free coca tea for newcomers.