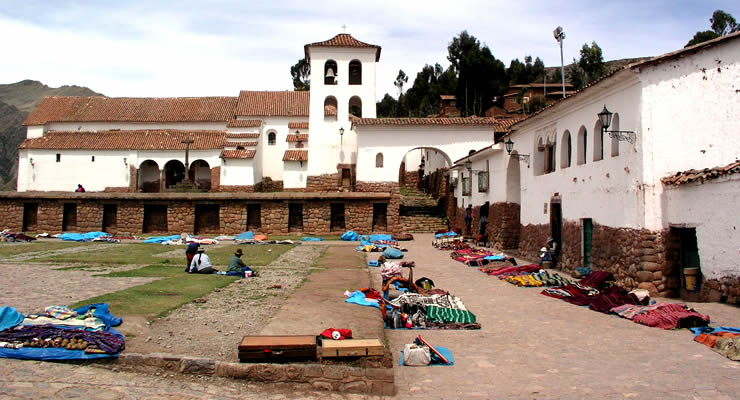 The village of Chinchero

At an altitude of 3,762 meters above sea level (higher than Cusco ) in the middle of the fantastic Sacred Valley , there is the small rural town of Chinchero.

Little known by mass tourism, the town actually offers several attractions for tourists, from Inca ruins to megalithic remains. But the real celebrity is the Chinchero Market , where the famous Peruvian fabrics , typical of this area, are sold.

Inca ruins are scattered throughout the city. Interesting are the remains of an ancient throne with wonderful bas-reliefs.

Tradition has it that the Inca Tupac Yupanqui, son of Pachacutec , used the village as a sort of countryside refuge.

He had aqueducts and terraces built, some of which are also used today and which make Chinchero soil one of the most fertile in the Sacred Valley.

The soil produces potatoes, olluco, goose, quinoa and broad beans and is sold at the local Chinchero market.

The church, built by the Spaniards, dates back to 1607. It was built on the remains of an ancient Inca palace, perhaps just the summer residence of the Inca, which blend harmoniously with traditional Andalusian motifs.

The fabrics of Chinchero

The Chinchero market is located here not by chance. Chinchero is in fact the recognized center of weaving in Peru, home of the Interpretation Center of Andean Textiles.

The activity is mainly female and local women entertain tourists with demonstrations of this ancient art of mixing different colors.

At the textile cooperative it is possible to see how alpaca wool is washed, dried and spun, to create clothing.

During the demonstrations (free, but a tip is recommended) mate de coca is offered, to be enjoyed together.

The local textile production is all sold on the market. The Chinchero Market thus turns into a colorful and full of life place.

Antagonist to the most famous, but also most touristic, Pisac market, the market is held on Tuesdays, Wednesdays and Sundays. On Sunday the market reaches its climax, involving the inhabitants of the neighboring countries, who go down to Chinchero to sell goods of all kinds, from crafts to agricultural products.

How to reach the Chinchero Market

The Chincero Market is located about 40 minutes from Cusco. If requested, the collective buses connecting Urubamba and Ollantaytambo can stop.

All individual tours in the sacred valley can stop at the village, while only some group tours provide for it.

The entrance to the village is regulated by the Cusco Tourist Ticket .