In the heart of the southern Peruvian Andes, you will discover places where nature and people still live in perfect harmony and the ancient traditions make the Colca Valley a unique place.

To reach the Colca Canyon, departure from Arequipa in the morning. The first stop will be the Aguada Blanca Nature Reserve, where South American camels live, such as vicuñas, alpacas and llamas. On the way you will see one of the highest peaks in the Andes: the Chila chain with its majestic peaks and perennial snow. You can also admire the volcanoes Hualca Hualca, Sabancaya and Ampato. In this region, an old popular belief says that if you build a small house called “Apacheta” in life, you will be very lucky.

Chivay Square is the starting point to explore the Colca Valley. The alarm at dawn will allow you to admire the magical flight of the Condor, the ancient divinity of the Andes.

The tour will continue with a visit to the indigenous peoples who still work today using ancient agricultural techniques and outdated methods on the slopes of the Colca Canyon.

Maca is a traditional city in the Colca Valley, a settlement with a Catholic church built in 1759. Not far from the main square you can see the agricultural terraces in use since the pre-Inca period. A place of peace where you will enjoy taking photos.

Achoma has a church dating from the 16th century, completely built in lava stone (called sillar or sillar). On January 6 of each year, the local population celebrates the feast of Our Lady of Bethlehem and the inhabitants come from all over the valley to dance the picturesque wititi.

Yanque will be the last destination before returning to Arequipa. Its baroque church, dedicated to the Immaculate Conception, has a facade adorned with effigies of numerous saints and a representation of the Andean world. It is considered the most beautiful colonial style church in the entire valley. The Yanque district preserves the heritage of the ancestors: the Collahuas. Costumes, traditions, architecture, archaeological finds such as the ruins of Uyo-Uyo, as well as museums, natural pools and hot springs are the delight of tourists.

If you want to understand the Andean world, you must visit these places and you will be surprised by the atmosphere of the Colca Valley. 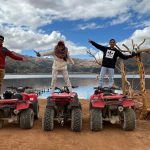